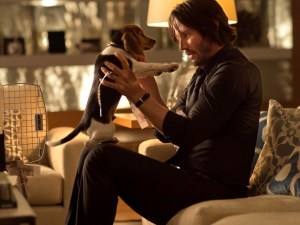 1. A hired-killer revenge flick. Keanu is called upon to grimace & bleed & murder a fuck-ton of people in entertaining ways. He delivers.

3. SPOILER ALERT there is an adorable puppy! The puppy dies! YOUR GIRLFRIEND HATES THIS MOVIE AND YOU AND HOW COULD ANYONE EVER

4. You can feel the producers of John Wick back-patting themselves thinking they made a hip, stylish film. They are easily impressed.

6. Anyhow, there IS fun to be had. But if you’re in the “JOHN WICK is an overlooked gem” camp, YOU’RE easily impressed.